building interactions with a scoring system

Building interactions with a scoring system

This tutorial is going to walk though building a very simple "mini game" with a simple scoring system. The game will involve throwing balls at a target for points.

We will be introducing several new Flipside Creator Tools components to do this:

To see a complete example of how these components can be used, open the Example-ScoringSystem scene in the Assets/FlipsideCreatorTools/Examples folder in your Flipside Creator Tools installation.

For the first step, we're going to ceate a basic Flipside set where our game will live.

Go to File > New Scene or press Ctrl+N in Unity to create a new blank scene.

Next, go to GameObject > 3D Object > Plane to create a floor for your set. When you do, Unity may not place it at (0,0,0) so take a look at the Transform component in the Inspector window and make sure the position values are all set to 0. Also set its scale values to 10 to make sure it's big enough that we can't throw a ball past it.

With your floor plane object still selected, choose Add Component at the bottom of the Inspector window and add the TeleportObjectsOnContact component. This will be used to make the balls reset to their original position so you can throw them again.

Now go to File > Save or press Ctrl+S to save your scene.

Lastly, go to Flipside Creator Tools > Create Set From Current Scene. You should now have a scene that looks like this and is all set up for bundling and uploading. 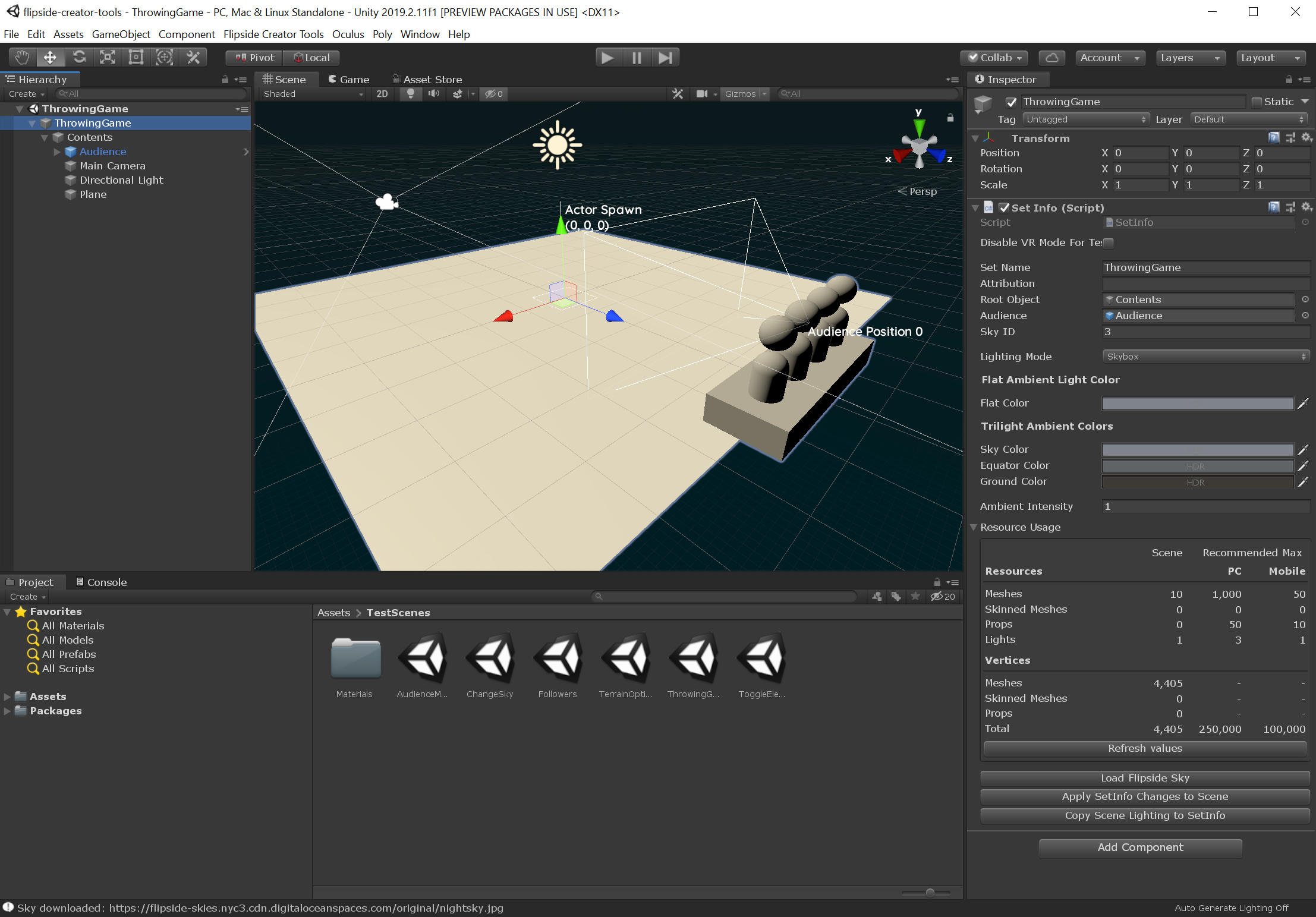 For fun, I also like to change the sky of the set. Click on the root object of the set and on the SetInfo component in the Inspector window, set the Sky ID to 3. This will load a slightly cartoony night sky when you press play or load the set in Flipside Studio.

Setting up the scoring system

Next up, we're going to right-click the Contents object in the scene Hierarchy and choose Create Empty to add an empty child object that we'll use to contain our scoring system.

Edit your newly-created object and rename it to something like Scorekeeper, so it's easier to keep track of where your key components are found.

With your Scorekeeper component still selected, click on Add Component in the Inspector window and add the ScoreboardElement component.

Scroll down in the Inspector window and click Add Component again then add a PooledAudioElement component here as well. We'll use this for triggering audio effects when the balls hit the targets and when a user wins, which we'll connect right away.

Lastly, click on the icon next to the box labelled None (Audio Clip) and choose the audio clip named Jingle_Win_01, which is a free sound effect from the Sci-Fi Sfx package. Here's how it should look when it's set up correctly:

Setting up a target

Next, we're going to set up a target. This target won't move or do anything fancy, but you could use the Unity animation system to make it move around for bonus points and to make the game more challenging for players.

Right-click Contents again in the scene Hierarchy and choose 3D Object > Cube then adjust its settings like so:

Now click on the Add Component button in the Inspector and add a TargetElement component.

Under the OnHit event, click the + icon to add an empty slot, then drag your Scorekeeper component into the newly-created slot.

Lastly, click on the icon next to the box labelled None (Audio Clip) and choose the clip named JustGore_AddOn_Splatter_070, which is a free sound effect from the SoundBits Free Sound FX package.

Right-click Contents in the scene Hierarchy and choose 3D Object > Sphere. Set the sphere's settings like so:

Next, add PropElement, ThrowableElement, and TeleportObjectTo components to your ball object through the Inspector window.

To set up the ThrowableElement, for now just uncheck the checkbox labelled Destroy On Contact.

To set up the TeleportObjectTo, right-click Contents in the Hierarchy and choose Create Empty, then rename it Ball 1 Teleport Position and copy the Transform settings from the ball to the newly-created empty object.

Tip: You can copy settings from one component to another of the same type by clicking on the gear icon in the Inspector for that component and choosing Copy Component. Then on the component to be overwritten, do the same thing and choose Paste Component Values.

If you press play in the Unity editor, you should now see your ball fall from its initial position and keep getting teleported back, only to fall again and again. If you catch the ball and throw it at the target, the target should play a sound when it's hit.

Let's fix things up so the ball isn't so hard to catch, and also make it feel a little more like a game.

Right-click Contents again and add another cube to the scene. This will be a stand for the ball to sit on when it spawns. Set its Transform settings to the following:

To make our game usable for multiple players, select the ball, its teleport position, and its stand in the Hierarchy window, right-click and choose Duplicate.

From there, just change the X position from -0.5 to 0.5 so it appears one meter away from the original, like so:

Lastly, lets make the scores visible to users as they're playing.

Right-click Contents again and choose 3D Object > Text - TextMeshPro. Select your scorekeeper object, then drag your new text object into the Display Scores On setting. There are ways of building custom score displays using the various event triggers on ScoreboardElement, but this gives an easy way to quickly get a visible scoreboard on set.

As a last step, select the newly-created text object, change its Font Size setting to 8, and adjust its Transform settings like so: 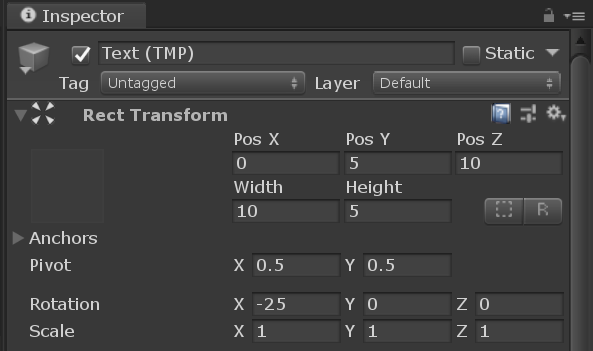 Note: If you don't have TextMeshPro installed, you can find it under Window > Package Manager.

You should now have a working game when you press play in the Unity editor, and which is ready to bundle and load up in Flipside Studio.

As you can see, the scoring system is fairly straightforward to setup and makes a lot of the connections automatic, including multiplayer and detecting which player made a throw for scorekeeping. And this just scratches the surface of what's possible to build, including cooperative games such as escape rooms, shooting games, and more.

For a more complete example look at the Example-ScoringSystem scene in the Assets/FlipsideCreatorTools/Examples folder.

Other ideas for making a more interesting mini game:

These are just a few suggestions, but we hope that gives you a better understanding of how to start building your own mini games using the Flipside Creator Tools, and we look forward to seeing what you come up with from here!