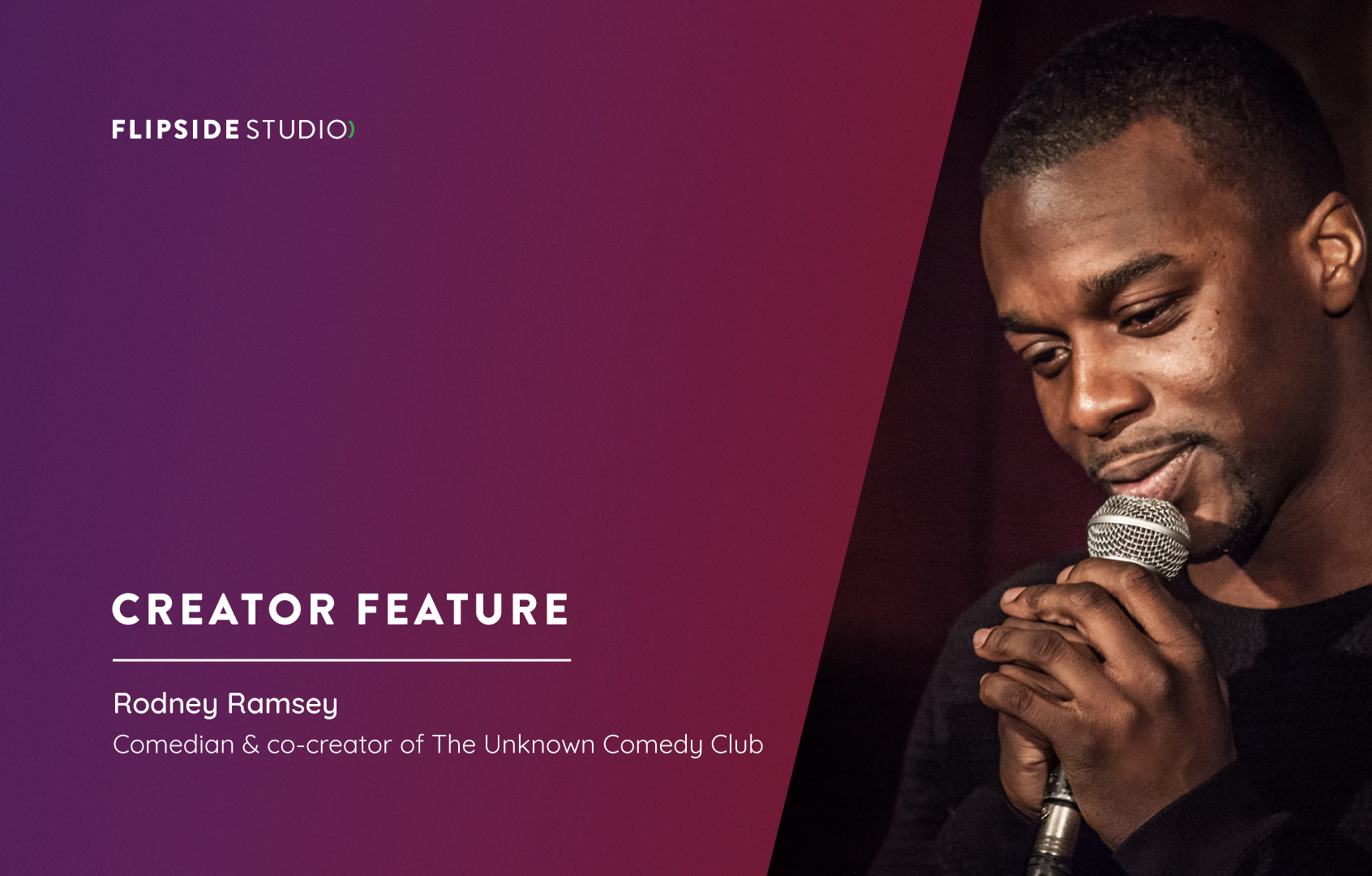 “This is one of the greatest things I’ve ever done, like I’m a live cartoon right now . . . You have to understand how weird it is that I’ve done more stand-up as an avatar than as a real person [in the last year].”

Rodney Ramsey has been doing comedy for 20 years —touring, comedy clubs, festivals. All of those things went away when COVID-19 arrived. Comedians had to take their acts to the virtual space, with most either doing Zoom shows or TikTok videos. Rodney wanted to take a different approach to bring that live/televised comedy show vibe back into the mix, and as someone with VR and production skills, he knew Flipside Studio was the vehicle to do it.

We chatted with Rodney about how hosting comedy in VR has taken his career to new places, making him busier than ever before.

“I was always kind of the class clown and during college, I was bored. Then I did stand-up and it was like, wow, I've never had that much fun. That was it for me,” says Rodney. He started out in Montreal, and after exploring other cities while touring, decided to stay there to build his career.

“All the artists in my industry, they either go to New York or L.A.” Rodney says.  “I'm in this weird, cool artistic thing where everything is supposed to be creative, yet everybody does it the exact same way, which never made any sense. So I said, ‘I'm going to see if I can do this from Montreal.’ And it's been going great.”

Rodney has always taken an experimental approach to comedy, creating different productions to see what lands with his audience. His first production was called The Drunken Show where both the performers and the audience would get drunk (and maybe a little high) and just see what would happen.

He normally averaged around five productions a year before, but since using Flipside Studio and taking his shows into the virtual space, he’s accelerated his production level to the point where he’s done 60 shows this year already.

“It took me a while to get here, you know what I mean? It's not easy. You really got to either have the knowledge or really want it.”

Incorporating real-time VR mocap animation into Rodney’s act didn’t happen overnight. Luckily, being a stand-up comedian developed a lot of the skills he needed for production.

Those skills, combined with a love for tech, specifically VR, and the COVID lockdown situation led him to create The Unknown Comedy Club with co-founder Daniel Woodrow.

“What makes this thing special is the production value . . . people need to feel like it’s television.”

Rodney hosts The Unknown Comedy Club shows as a cartoon avatar and delivers his stand-up while operating the camera in real time.

Rodney is always surprised how quickly people get comfortable with the avatar and don’t even question it.

“I will be sitting at my desk [as an avatar] and I'll pick up coffee and start drinking the coffee. Nobody says anything ever, until I point it out. They're there with you, you know?”

Being into tech, Rodney had the idea to merge VR and stand-up comedy and tried several apps before discovering Flipside. What made Flipside Studio work for him was the real-time mocap animation capabilities, along with the integration with Zoom. It’s now gotten to the point where some people come to the shows just for the avatar.

“They're coming to see the avatars, you know what I mean? They're like, yo, this guy over here, he's doing a show on the moon. There's a supernova happening in the back. You know, it ties it to the punch line. It's crazy.”

Although most of the other comedians performing during the show aren’t performing as avatars—they perform in front of a green screen so Rodney is able to match the backgrounds, the whole production feels a lot more like watching live television than watching a standard Zoom call.

Doing stand-up comedy using VR mocap animation has made Rodney’s brand of comedy into a niche he occupies with very little competition, but his goal is to bring more comedians into VR.

“I'm looking at it like the avatar show. That's all I want. I want to be able to have a bunch of people do it. If I can collab with a bunch of people who are avatars from wherever they are, that is insane to me.”

4. How does Flipside Studio help you make money?

The next week they did another show, and so on, until they had the hang of the format and wanted to do more with it. Rodney and his co-creator Daniel Woodrow had been doing a comedy tour called the Underground Comedy Railroad, an all black comedy tour, for the last nine years. It had always been in person before, but if they were going to do it this year it would have to be virtual. They had three weeks to pull it together.

“We did a five show tour with Flipside. This is like a huge thing for us because before that we weren’t a club . . . We made more money that weekend, virtually, than we had in the nine years that we've been doing the show, leaving our house.”

With all the comedy clubs shut down during the pandemic, The Unknown Comedy Club has been a way to keep the shows going and not only get paid, but also pay other comedians as well, and Just for Laughs took notice. Rodney is performing more shows at the internationally acclaimed comedy festival this year than ever before.

“Flipside plus Zoom plus a few other things, you know what I mean. Like yeah. Magic.”

Find out when the next Unknown Comedy Club show happens and get your tickets!

Catch Rodney’s act at Just for Laughs and watch out for Rodney's JFL Originals comedy album to be released this fall.